Rotorua Library, into the 21st Century.

LARRI (Library Automated Recording and Retrieving of Information) our first ever computer, 1987

January 2006 - Scan to email service via the Library Photocopier.

September 2007 - our BEBO page was launched.

Teenzone's first attempt at making a movie! the movie was made in 5 scenes and posted to YouTube during the 2011/12 Summer School Holidays.

"eBOOKS available FREE to our library members.
We have 880 titles available—children’s, teens and adults, but this will increase regularly. eAUDIOBOOKS,were also available at this time.


Press Display - 2013. The world's Newspapers online and free for customers through the Library Catalogue website.

Free workshops to show customers how to use the ebook collection.

SteppingUp: May 2015-
Stepping UP is an initiative of the 2020 Communications Trust, a not-for profit community trust established by the Wellington City Council in 1996 to promote digital literacy, initially for Wellington citizens, but in the year 2000 the Trust expanded its scope to all New Zealanders. 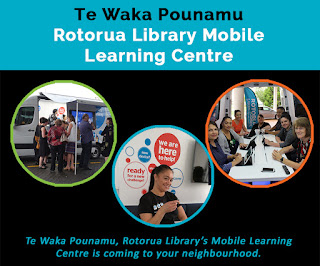 The Mobile Learning Centre, a Mercedes Sprinter van, is fitted with digital equipment and will be used as part of the library's mobile services. Purchase of the van was made possible by a donation from the Friends of the Rotorua Library.

Lynda.com is an online learning site that hosts a constantly growing library of over 5,000 courses that include over 130,000 videos. Courses cover a variety of topics (including business, design, web development and multimedia skills) and software (Microsoft Office, Adobe Creative Suite and open source applications) that can help you pursue personal and professional goals. These courses are delivered by expert instructors and feature searchable transcripts that make it easy to find quick answers to questions. They also feature Learning Paths and Certificates of Completion.

Posted by Te Aka Mauri Rotorua Library at 11:34 am No comments:

Rotorua Library with help from our Friends

Friends of the Rotorua Public Library

Also Known as 'Friends of the Rotorua District Library' 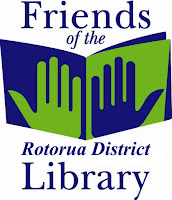 The Friends of the Rotorua District Library have been in existence since 1998 and have done great things for the Library and greater Rotorua community by fund raising Bookfairs, helping with Author visits.

The Friends now have a permanent book stall at Kuirau Park and it is run by them every 1st & 3rd Saturday's of the month at the same time as the Kuirau Park market (a Rotary initiative). The building they use was once a Tea kiosk, an Aquarium and ablution block.

The money they have raised has paid for a number of Children's Library events where Storytellers have come from Rotorua talent and also from other NZ places. The Friends had a lounge area in the Library which was created when the Library expanded in 2009. 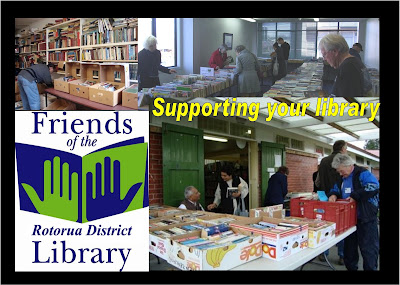 Posted by Te Aka Mauri Rotorua Library at 1:09 pm No comments:

Rotorua Library on the road

Posted by Te Aka Mauri Rotorua Library at 11:20 am No comments:

Rotorua Library, but first a look into the past.

It all began in 1889 when a few like minded citizens decided the town needed a library.

In March 1889 some 15 residents met in an old building next to Mrs Morrison’s Hotel at Ohinemutu to establish a Public Reading Room with home and colonial newspapers, periodicals, etc in which members could also play chess and draughts.
·        Committee of 12 was chosen with Dr Ginders elected as president. (see the document below) consisting of 3 Storekeepers, 2 Boarding House Proprietors, 1 Architect, 1 Saddler, 1 Surveyor, 1 Coach Driver, 1 Native Agent, 1 Teacher & 1 Carpenter.
·        Subscriptions were set at £1 per annum ($175) and visitors were to be allowed to use the Reading Room free of charge.
·        £25 ($4384) was donated by those present together with books and periodicals.
The Chairman of the Town Board lent the new library the use of the old building which had been first the Comet store and later a school. The District Superintendent of Native Schools let them use the desks and forms from the old schoolhouse and they obtained a kerosene lamp and a stove. 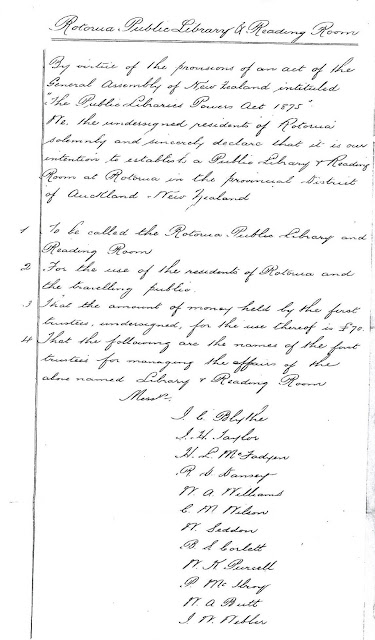 VICTORIA INSTITUTE was opened in November 1898
·        Miss Emma Coppell (or Coppel) was appointed caretaker and librarian at £10 per annum ($1571) Note this is £2 a year less than the cleaner was paid in 1890 and £5 less than the custodian in 1891
Description of Victoria Institute in about 1907
·        Set back from Arawa Street and next to the Maori Land Court.
·        The Library and museum was on one side of the building and on the other side was the Institute’s reception and cloakroom and an office for the Town Clerk.
·        The Library had about 1300 volumes at this time.


With thanks to the Don Stafford Collection and late staff member Mary Ellen Wilson, Reference Librarian, for the information and copy of the Library founding document.
Posted by Te Aka Mauri Rotorua Library at 9:13 am No comments:

In 1946 a Musicians Society existed and Mrs Sheaf was involved with that, she was nominated as a committee member of the Community Arts Centre formed in October of 1946, a provisional committee that also included the following people: Mr H. Taylor of the Operatic & Dramatic Society; Mr S.A. Cooper of the Drama League; Mrs H.E. Davis of the Women’s Club; Mrs G. Cruikshank of the NZ Education Institute; Mr L.H. Thompson from Rotorua High School and Mr Kusabs from the Rotorua Advancement Committee.

In 1946 a Rotorua Music Appreciation Group was formed by Mr James (Jim) Healy, an avid classical music fan who had just recently moved to Rotorua to work for the D.S.I.R. as the Government Volcanologist.  He became the founder Chairman of the Community Arts Council and was also the Record & Concert Reviewer for the Daily Post from 1952-1988.
Excerpt from Weekender 11th March 1988

In his role as reviewer, Mr Healy met with most of the visiting musicians… his first review was of the Tancibudek-Kriegel Trio, the trio consisted of Czechoslovakians  Mrs Tancibudek played the piano and Mr Tancibudek who played the Oboe and Mr Kriegel  a violinist from Austria. The trio had unbeknown to Mr Healy as Mr Kriegel had brought his own accompanist, he is reported to have said “he could not stand the Tancibudek woman” … Rotorua attracted some very good musicians including the Pascal Quartet … the Music Federation had preconceptions of what music would suit Rotorua’s provincial audience which did restrict the range of concerts’

Mr Healy said that “up 70 people came along to the Music Appreciation Group’s monthly meetings to listen to classical music records” however once records became more available to numbers dwindled, this group became the Rotorua Chamber Music Society in 1955, this later became the Rotorua Music Federation in 1980.’

Mr Healy also reviewed records for Rotorua’s first record shop in c.1962 (possibly Wiseman’s or Begg’s), he reviewed around 4000 records and he amassed a huge collection which ‘lined two walls of his home’.


With Thanks to the Don Stafford Collection Biography and Arts Folders for the above information.
Posted by Te Aka Mauri Rotorua Library at 10:47 am No comments: