Kia ora and welcome to our blog...

Now we’re up and running, our mission is to keep you in touch with our world, sharing views, opinions and ideas on reading, listening and watching. Our world is the world of information, so our team spend their working (and private) lives exploring books, movies, magazines, music, the web and more.

We’ll be sharing our experiences of our world through book reviews, introducing authors who are visiting the Library, showcasing collections that the Library has for you to use and enjoy, and lots more so keep visiting the blog to keep up with what's happening, or better yet sign up to follow us and we'll send you an email each time we post (Only once a week so we won't be sending lots of email's!).

We want your comments on the things we’ve got to say. This is a two-way street, so we want to know what you think about what we do. Feel free to share posts with your friends and family, after all, this library is your library.

Posted by Te Aka Mauri Rotorua Library at 4:50 pm No comments:

See if you can spot the differences

Have you ever been certain you know where a street is and it’s on the map you have had for years, but you drive to where it should be, but... where is it?

Excerpt from "Rotorua Streets" by Philip Andrews
"The earliest street names of the township appear on a plan in 1882... All but two of the 14 streets had Maori names : Arawa, Pukaki, Rangiuru, Hinemaru, Hinemoa, Tutanekai, Haupapa, Pukuatua, Eruera, Amohau, Pererika and Amohia". Page 3.
Moving on a few years ...
"Adam Place was one of a number of street name changes requested by NZ Post Office in 1981 because of duplication or similarity in sound or spelling"
The original name was David Place after the son of K.M. Griffiths, of Griffiths Holdings which subdivided land on either side of Edmund Road up to Clayton Road". Page 9.
This fascinating book is available to borrow from the 2nd Floor, Rotorua Collection at 993.423z AND﻿﻿

If you remember any of these streets tell/ share with us your memories.

Discover Your World with Rotorua Museum and Rotorua District Library

Rotorua Museum collections on display at the Library


As part of a new initiative Rotorua Museum Te Whare Taonga o Te Arawa will now be putting up small installations from its extensive collection at the Rotorua District Library.
The exhibits will be on show in the first floor display case in conjunction with the Library’s themed book selections which will change monthly.

The first Rotorua Museum installation is based on the idea of travel. It includes a selection of souvenir items from other countries including a Native American headdress, a range of objects from the Pacific Islands and a curious Dutch clog lamp. The Museum will be doing three displays a year looking at different themes and subject matter.

Posted by Te Aka Mauri Rotorua Library at 10:40 am No comments:

Book Review : "The dragon and the taniwha"


The Dragon and the Taniwha : a comprehensive study of how Maori and Chinese interacted in New Zealand. Edited by Manying Ip.

This book gives the reader a fascinating look at the history of these interactions and the role Maori have in Chinese immigrant’s experiences in settling into the NZ culture and lifestyle.
Chapter 1 is by Jun Lu and is entitled “Ancient Maori-Chinese ancestral links”


“On his arrival in NZ 10 years ago he read an article in the NZ Herald about Maori and was greatly intrigued by the word “hui”. Although he could not find the word in an English dictionary, it did not prevent him from understanding the sentence, because ‘hui’ means ‘meeting’ in Chinese. He was puzzled why an English article should include a Chinese word. Later he was stunned to discover that ‘hui’ is a Maori word meaning ‘meeting’, and it’s pronunciation and meaning are exactly the same as the Chinese word ‘hui’.”


Since his first encounter with the commonalities between Maori and Chinese, he has studied this topic and here in this book he shares what he has learned. An extensive bibliography accompanies his essay.


Well worth a read by anyone interested in how New Zealand communities are made up and why it works for these two cultures in particular.


Available to borrow from the Maori Collection on the 2nd Floor of Rotorua District Library. At 305.8z DRA
Posted by Te Aka Mauri Rotorua Library at 11:13 am No comments:

Foreword by Megan Hutching, past president of, National Oral History Association of New Zealand. “The stories in this book together make a mosaic illustrating the experiences of New Zealanders from Anglo India”.

The first story is by and about Wilfred Ainslie {Bill} Barlow from Calcutta.

“Both sets of grandparents were Anglo Indians and both his parents were born in Calcutta. Both parents died young in their 50s. He was an only child brought up by an Ayah and went to boarding school in Kurseong, Darjeeling 6000 ft. up in the Himalayas; a government run fee paying school. For 9 months of the year he was at school and on holidays he spent all is time with the neighbour who he called “Aunty” and her 3 kids who were also Anglo Indian.


Later he trained as an engineer apprentice in Calcutta, a course called BOAT (Board of Apprentices Training).   After passing this course he went and worked for Kharagpur Railways, it was while he was there that Pre-Partition or Indian Independence occurred across India. The first he knew about it was when he and three mates got a few days off they hopped a train to Calcutta getting off at Howrah Station, a normally busy, busy station… but when they arrived it was deserted and on walking back towards home they discovered there was no traffic on the roads either, a truly frightening experience for them.


He then went to England to do his Engineering ticket, he found he fitted in well as he had been brought up the British way. On returning to India he ended up working for a steam-shipping company and this was his introduction to other steam-ship companies from around the world. He saw an advert for a job in NZ for the Union Steamship Co. applied and was accepted. He and his wife arrived in NZ in 1971 and have lived here ever since.


You can read this and other interesting stories of some 27 other Anglo Indians from all regions of India in this book, borrowable from New Zealand Collection on the 2nd Floor or Rotorua District Library. At 993.004914z RAJ
Posted by Te Aka Mauri Rotorua Library at 11:09 am No comments:

We will remember them


WW100: Commemorating the anniversary of WW1.


Excerpts from James Cowan's 'The Maori's in the Great War'


"In Rotorua there were scarcely any but older people, the women and children, every Arawa who could pass the doctor and look fit to carry a rifle and swag went into the camp to train for the great adventure. The age limit was liberally construed. There is a young Maori at Matata who enlisted with the Arawa in the 1st Maori Contingent, fought at Gallipoli in 1915 was invalided home where he married an Arawa girl and volunteered for further service abroad when his wife stopped his wandering by informing the authorities that he was only seventeen!"

"The Arawa and the Ngati Kahungunu of Te Wairoa were the first to volunteer to go to war for the British. They were organised into B Company and Platoon's 5 to 8 were shipped out to Auckland firstly on the troop-steamer 'Warrimoo' to Wellington where they took part in a Parade at Newtown Park before leaving for Gallipoli on 15 February 1915"

By NZ Divisional Orders the formation of the NZ Pioneer Battalion was authorized on Feb 20th, 1916. The Battalion was to consist of officers and other ranks drawn from the N.Z.M.R.

"Captain Roger Dansey, whose dash has already been mentioned, himself killed three Turks with the bayonet. An anecdote of his alertness...was narrated by by one of his men long afterwards. "Captain Dansey", he said is as good a fighter as he was a footballer. Once a big Turk jumps up ahead of him he levels a rifle at his head. But Dansey just ducks and goes in for that Turk low down; the bullet goes over his head..." 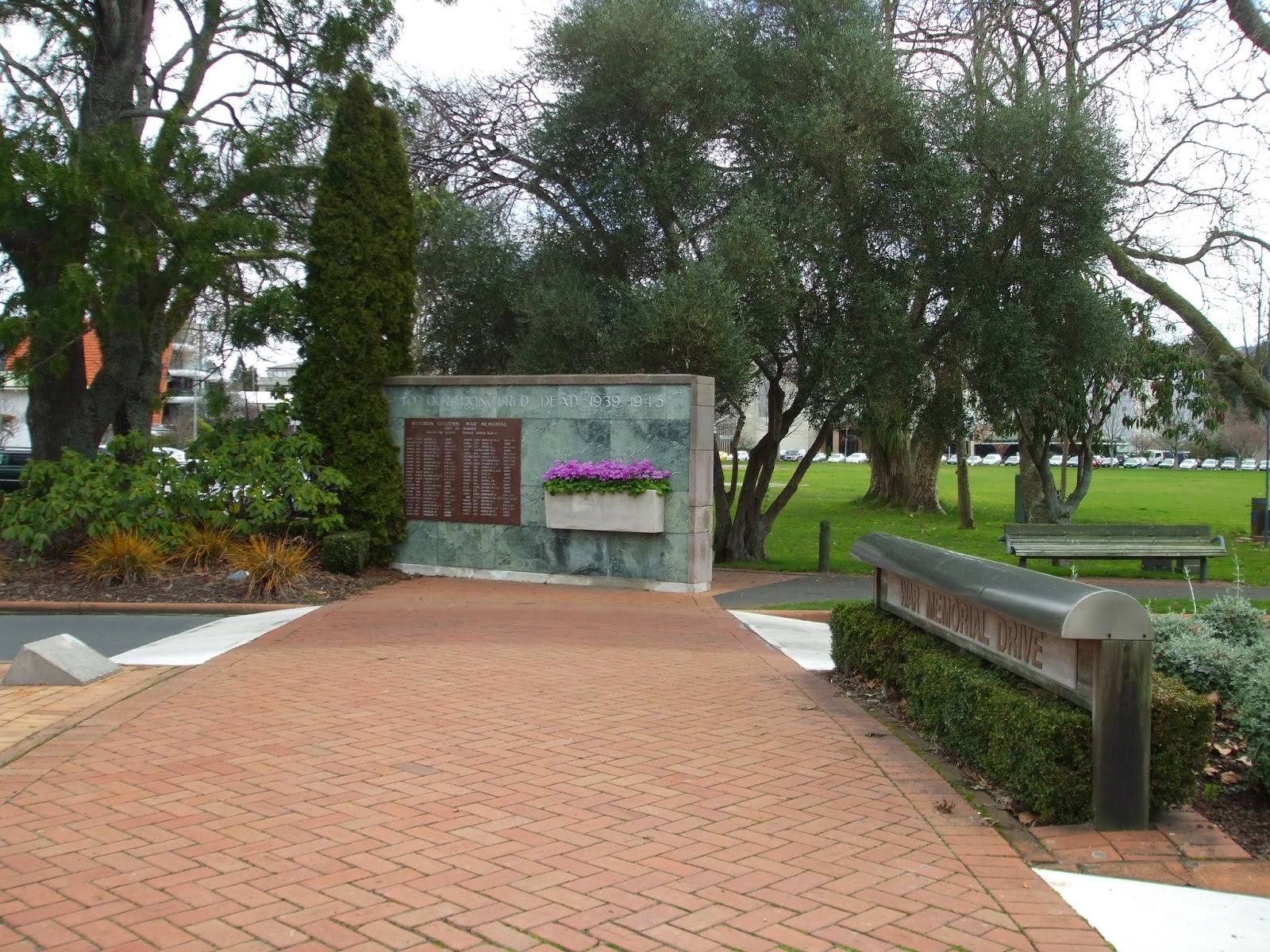 Available to borrow, from the Maori Collection, on the 2nd Floor of Rotorua District Library. At 940.48z COW
Posted by Te Aka Mauri Rotorua Library at 8:16 am No comments: