"Significance of Anzac Day" from www.anzac.govt.nz

"On 25 April 1915, eight months into the First World War, Allied soldiers landed on the shores of Gallipoli peninsula. This was Turkish territory that formed part of Germany's ally, the Ottoman Empire.
The Allied forces encountered unexpectedly strong resistance from the Turks, and both sides suffered enormous loss of life.

The anniversary of the first day of conflict, does not mark a military triumph, however it does remind us of a very important episode in New Zealand history..."

New Zealand lost 2779 men and some 4852 were wounded, a terrible loss for Kiwi families that continues to impact on them to this day. Rotorua alone lost over 100 men. 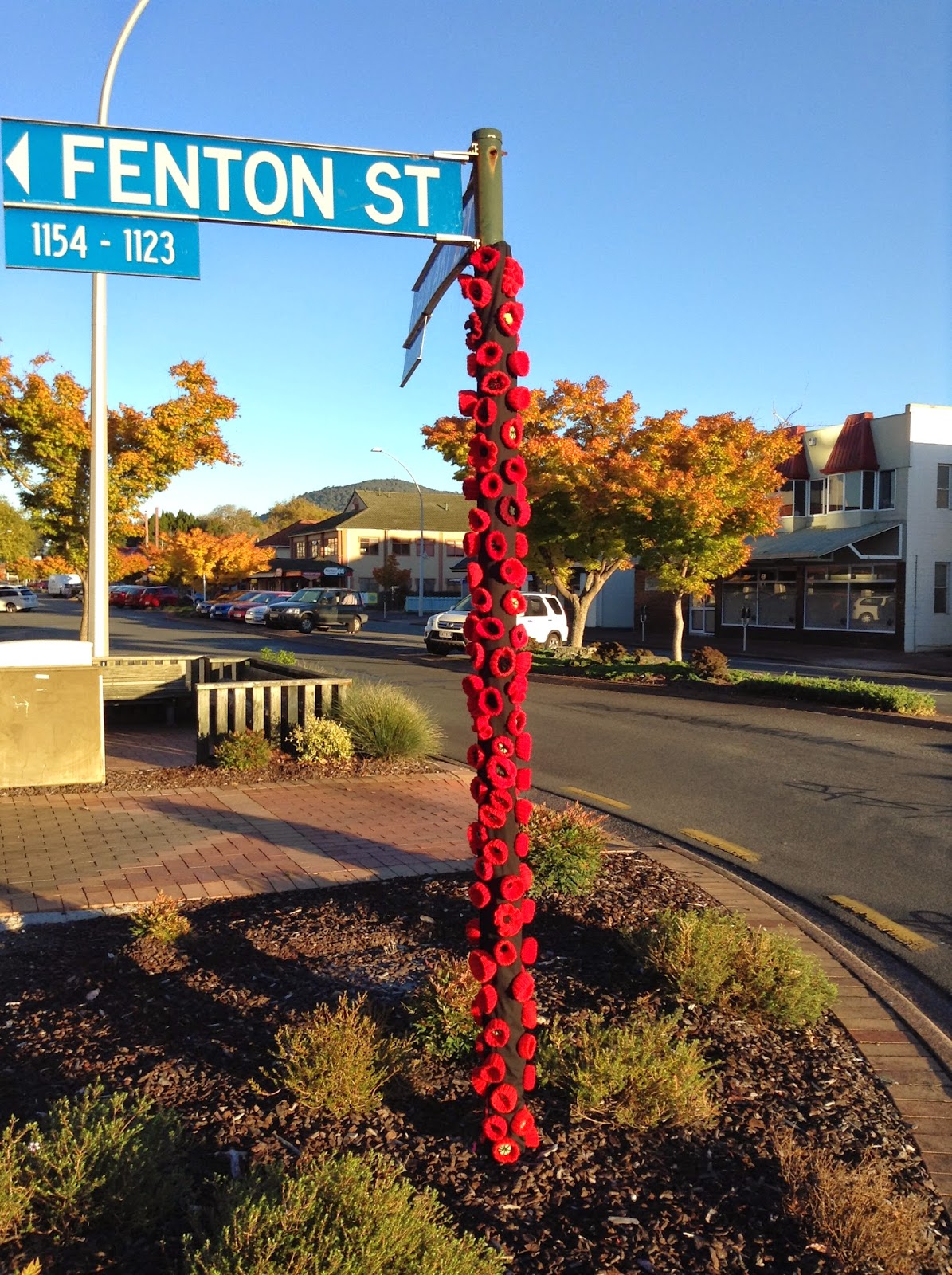 To commemorate the 100th Anniversary of WW1, 25 April 2015:
The Poppy Project done by knitters nationwide was also entered by the Rotorua Yarn Bombers and anyone who wanted to knit a poppy.  These are just two of the poppy installations in Fenton Street.

For more installations check out Government Gardens and the Rotorua Museum.


Rotorua's WWOne Memorial in the Government Gardens you can see this memorial near the Croquet Pavilion.
There are other memorials to our soldiers in Rotorua, there is one at the entrance to Whakarewarewa Village the "Te Hokowhitu a Tu" Memorial Arch commemorates soldiers of Tuhourangi who died in the two World Wars, opened 22 April 1950. 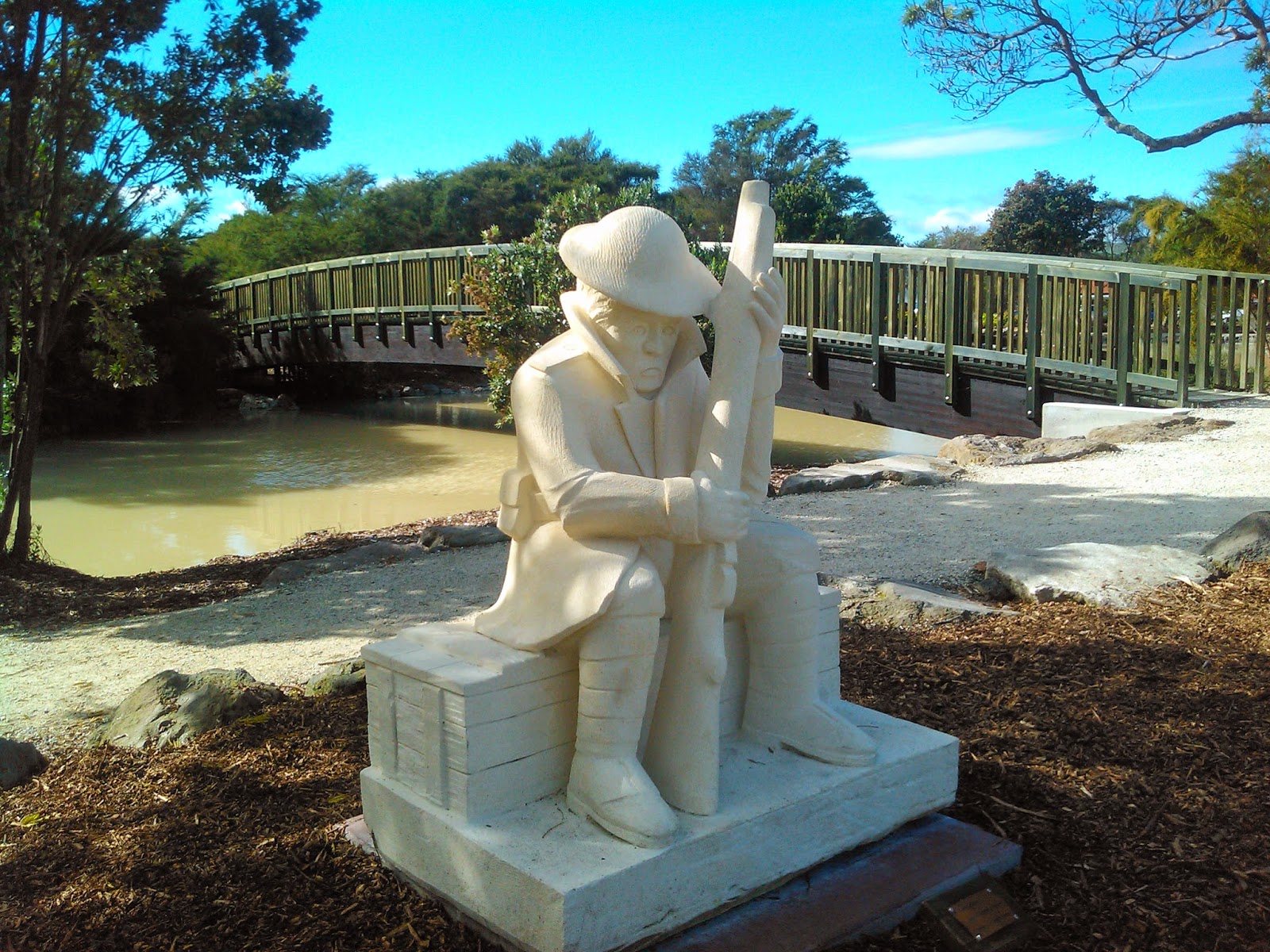 Title: Gallipoli
Artist: Logan Okiwi Shipgood
Medium: Oamaru Stone
This is the image I left Gallipoli with …
A battle weary soldier, a shell-shocked survivor contemplating what it was all for.

Posted by Te Aka Mauri Rotorua Library at 10:46 am No comments:

Starting with Ruapekapeka Pa and winding through Auckland, to Maungapohatu and Rua Kenana’s temple ‘Hiona’, then south to New Plymouth, Napier, Rangiatea at Otaki and on to Wellington and the South Island, this book covers all the grand and well known homes, and many public buildings that once graced our land.
Such grand homes and extravagant government residences were popular in the early days of British colonisation of New Zealand, one in Auckland “Admiralty House” was never used for the purpose of housing Commodore William Wiseman at all, but eventually became a guest house and demolished in c1915.
This fascinating book documents and illustrates early architecture in New Zealand that for the most part are no longer standing as progress has overtaken their location.  The author Richard Wolfe is a well-known social historian and author of over 30 books.

Available to borrow from the 2nd Floor.  993z WOL

Posted by Te Aka Mauri Rotorua Library at 9:38 am No comments:

Toko Street was named after Roger Delemere Dansey who was the Postmaster for Rotorua at the time of the Tarawera Eruption (1, 2, 3). Probably owing to his association with telegraph poles, Dansey was nicknamed Toko, meaning pole (2).

Dansey is well known for sending a Telegram letting the outside world know of the “fearful night” of the Tarawera Eruption and also as the Chairman of the Rotorua Town Board from 1895-1897 (4, 5).

Four things you may not know about Roger Delemere Dansey.


1.   He’d just got home from a birthday party when he started noticing strange happenings on the night of the Tarawera Eruption. Both he and another local man, J.H. Taylor, shared the 9th of June as a birthday (4, 6, 7). You can listen to some of Dansey’s terrifying and fascinating account of the Eruption online at the links below or come into the Library and listen to his full account (6, 7).


2.   The duo, Rosy Tin Teacaddy,  wrote a song about Roger Dansey called “Telegrams and ashes” as part of the album “Mountains are all men” for the 125th Anniversary of the Eruption (8 ,9).


3.   Dansey may not have ended up as the postmaster and Chairman of the Rotorua Town Board, as folklore has it that his wife Wikitoria Ngamihi Dansey (nee Kahuao) saved him from drowning after he dived off cliffs into the Waikato River near Taupo (4, 10). Nearby Victoria St is named after Wikitoria (2).


4.   Dansey laid the foundation stone of the Victoria Institute which housed the Rotorua Library in 1897. He placed coins and a copy of the Hot Lakes Chronicle in the stone (4).

Posted by Te Aka Mauri Rotorua Library at 12:05 pm No comments: