Starting with Ruapekapeka Pa and winding through Auckland, to Maungapohatu and Rua Kenana’s temple ‘Hiona’, then south to New Plymouth, Napier, Rangiatea at Otaki and on to Wellington and the South Island, this book covers all the grand and well known homes, and many public buildings that once graced our land.
Such grand homes and extravagant government residences were popular in the early days of British colonisation of New Zealand, one in Auckland “Admiralty House” was never used for the purpose of housing Commodore William Wiseman at all, but eventually became a guest house and demolished in c1915.
This fascinating book documents and illustrates early architecture in New Zealand that for the most part are no longer standing as progress has overtaken their location.  The author Richard Wolfe is a well-known social historian and author of over 30 books. 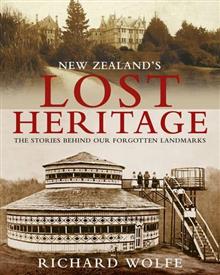 Available to borrow from the 2nd Floor.  993z WOL

Posted by Te Aka Mauri Rotorua Library at 9:38 am