Fairy Springs and more from Rotorua

Rotorua has many natural springs

Over the years Rotorua's springs have been tourist attractions, water sources for the city and great fishing spots as well.

Information with thanks to the Don Stafford File, Tourism 1862-1939 :
Fairy Spring was free to visit and fish, until 1897 when the visitors were charged 6d for the privilege.

The next was Rainbow Springs opened in 1928, where people could put their hands in the water 'tickle the trout' and also to feed the two famous fish 'Elsie' and 'Hori', sadly Elsie died in 1949, no mention is made of Hori's demise.  Rainbow Springs Camping Ground was opened and run by Mr E. Bruce in c1928.

In 1973 the Rainbow & Fairy Springs merged to become one business and the new owners set about planting trees and upgrading walkways between the two.  Today this is known as Rainbow Springs Nature Park.

Paradise Valley Springs is written as being open to the public in the Rotorua Morning Post 23.10.1939. However as the link below shows, this area was being visited in the early 1900's.

Hamurana Springs was a thriving business as one of the best trout fishing areas of the region as early as 1887, also one could "gaze into an immense hole, which in every 24 hours emits 5,000,000 gallons of cold water" from New Zealand Tablet 11 June 1903, page 5.
A Fishing Lodge was available for keen anglers to stay from c.1923. 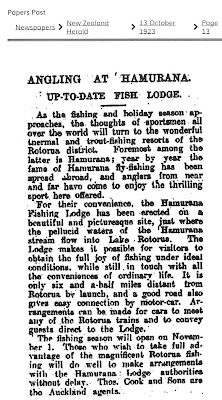 Taniwha Springs was opened to public prior to 1955 when it was reported that a two-toned trout named 'Harvey' underwent an operation. [what for is not known]
Posted by Te Aka Mauri Rotorua Library at 3:32 pm No comments:

Bikes, Bush and the Great Outdoors of Rotorua

Hunting became popular with overseas visitors in the 1950's in New Zealand, and Rotorua's Rex Forrester had already proved himself to be a successful hunter gatherer with his business New Zealand Safaris.  He then went on to publish two books on his craft "Hunter for hire" c.1965 and
"Hunting in New Zealand" c.1967.

His next job was with the governments Tourism & Publicity Department employed as a Hunting and Fishing Officer. This was to be 1 year job, but it turned into a 20 year career. He retired in 1986 and became a full-time writer from his Kawaha Point home. He passed away in 2001, but his books live on in libraries around NZ as well as our own Rotorua Library.

Information above is with thanks to the 'Don Stafford Collection', research notes held in the Heritage & Research section of the Library.

To see an interview with Rex Forrester by Don Stafford, borrow the DVD from the NZ History & Travel section.This interview was conducted by Don in 1998.

Here is a small sample of his books :

Available to borrow from the
Library, shelved with the sports books.
Posted by Te Aka Mauri Rotorua Library at 3:30 pm No comments:

Fishing in the Great Outdoors of Rotorua

Trout Fishing a popular sport in Rotorua since c.1886

From "Don Stafford Collection" Fish & Wildlife folder :
"Mr R.D. Dansey noted in his diary of 1900 a memo regarding trout distribution in the Rotorua District"  as follows :
"1874  Josiah Firth. March. White fish ova from America in Awahou Spring and Stream, also Lake Tarawera.  No fish ever heard of as being seen."

So, not successful then, it seems, but by 1886 it is also noted that the "Rotorua Town Board paid J.H. Taylor to obtain and carry fish fry from Tauranga."

In 1893 Mr R.D. Dansey, himself, introduced Rainbow Trout into streams on the western side of Lake Rotorua and also into Lake Taupo.


With thanks to Phil Andrews book "The Ngongotaha Story" for the following information :

So keen were the trout fishermen that the 'Waikuta Trout Hatchery' came into being in 1907, set up by the Tourist & Health Resorts Department.  The 1st trout hatchery was at " Te Ahi on the Pukahu Stream, near Lake Rotorua.
A second hatchery was proposed at Waimata Springs in c1923, below the site of the former pa named Waimata on the northern flank of Mt Ngongotaha. A salmon station was also proposed to be sited close by.
Eventually the "Waimata Hatchery site was gazetted an acclimatisation reserve on 27 November 1924"

To read more of this story, Phil Andrews book is available to borrow from the NZ History & Travel section at 993.423z AND.

Trout fishing is still a very popular sport and Rotorua's lakes, and selected streams in trout fishing season, are sought by anglers from far and wide.

Here are some sites to help you choose your favourite fishing spot : Posted by Te Aka Mauri Rotorua Library at 11:25 am No comments:

Fish out of water?

Rotorua's Fish out of water competition popular as ever! 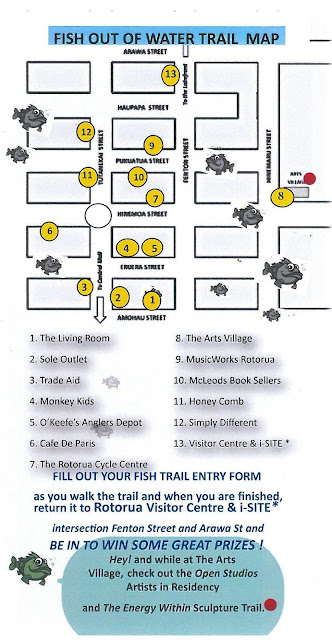 The map shows the locations of where each 'fish' was during the competition.

The competition has finished for the summer and the judges have made their selection.

Below is a small sample of this year's entries. 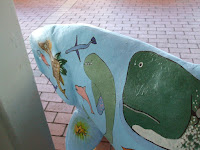 Posted by Te Aka Mauri Rotorua Library at 3:48 pm No comments: