Rotorua: Summer of STEAM : Biking and Cycling of Times Past

The following is an excerpt from a news article entitled "An ungallant Town Board" :

"in Strictly reserving the footpaths of the Town to pedestrians ...these callous Boardmen would not listen to the voice of the charmer (who in this case was the Hon. Secretary of the Lady Cyclists Club) charmed she ever so wisely, but turned a deaf ear to all her supplications...the letter placed before the board asked on behalf of lady bikists that they should reconsider it's decision...and allow the fairer sex to use same" As reported in the Thames Star of 8 April 1899. Click here to read the Full Article

The following rendition of a Lady Cyclist is from 1897 and was published in the Christchurch Star.
In 1898 the Bellvue House on Fenton Street, advertised their location to be most suitable for cyclists.

The advertisement does not make mention of the condition of the roads in the town however!  These were in construction from c.1890 and the Town Board had also "resolved that notice board printed on calico be erected , warning in English and Maori against 'leading, riding or driving horses, or any animal, along the footpaths. The police were to be asked to prosecute anyone infringing this by-law.' in Gold and geysers by Phil Andrews p.85


"In February 1898 an epic decision was made by the Town Board to lay down bicycle tracks beside the footpaths - the first such scheme in NZ." in The Founding Years by Don Stafford p.317.


NOW
Today in Rotorua we have a similar situation with bicycle paths, some of which are shared with pedestrians on the CyWay. 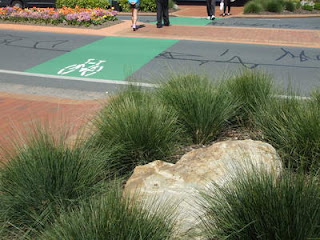 Posted by Te Aka Mauri Rotorua Library at 10:02 am No comments:

Phil Andrews writes a fascinating story on the life of Mr Malfroy, for whom Malfroy Road was named.
A Gold prospector, Gold Mining Company owner, Ingenious Engineer and Geyser Engineer.

In Phil’s introduction he records for us a snapshot of the popular and well like man who moved to NZ from the Australian gold fields in c1863. Phil covers Malfroy’s early life in the region of the Ross goldfields before moving to Rotorua just days after the Tarawera Eruption.  He becomes an integral part of the Rotorua community and was responsible for building up the Government Gardens and township where it is today.

Malfroy’s Geysers are no longer geysers but the site can still be seen in the Government Gardens today.
The photograph below was taken c.1919 by Frederick George Radcliffe.

Posted by Te Aka Mauri Rotorua Library at 1:39 pm No comments:

Christmas in Rotorua a special time of year

Rotorua Library loves being in the Parades

Rotorua Library's first ever Santa Parade entry was our NEW Mobile Library Bus in the 1988 Parade with a big red Christmas ribbon around it's middle.

Then in the Rotorua Public Library Centennial year of 1989, staff members, Joanne & Mary Ellen volunteered to stand on the float as pictured below.

Rotorua Library then had a break from the parade scene until 1999 when our next NEW Mobile Library Bus was entered.  For the year 2000 the library borrowed a bus from a staff member (Lea-Ann Carter) which was decorated and ably assisted by more staff and a few of the children of Library staff and hangers on. The photograph below was taken just before heading around to Rangiuru Street to take a place in the long line of floats.

In 2001 Fletcher Tuatara made an appearance in his egg...which duly hatched in the Library...

Once Fletcher was 'born' he made a number of appearances in the Library and at some local schools. For the 2003 Santa Parade, Fletcher along with his (food) caterpillars joined the fun.

In the 2004 Santa Parade, Fletcher went along with some cute Fairy Tale Characters.
Rotorua Library had a year off to plan another fabulous Christmas themed float, with little angels of Library Staff and one or two staff as well.

Christmas is always a good excuse for a bit of fun!

Posted by Te Aka Mauri Rotorua Library at 10:48 am No comments:

The first ever carnival was held from 24th February of 1903 for 1 week.  Visitors from Auckland and all the surrounding districts were in Rotorua for the commencement of the 1st Annual Rotorua Carnival... Read about the opening of the carnival, how many attended the event and the parades which included canoes. The highlights of the carnival were the Maori events which included a war canoe race.

Beyond this date there is no mention of the Carnival again until 1928-29 when it was a week-long event held 24th December to 1st January. Culminating with a New Year’s Eve Dance at the Majestic Ball Room, the band was Epi Shalfoon and his Melody Boys.

The organisers from this time on were members of the Rotorua Borough Council. Advancement Committee.

In 1931 a Rodeo was held at Cochrane Park near the Ohau Channel. An advert in the New Zealand Herald listed the following attractions: “Steer Riding, Speed Boat races, Aquaplaning, Maori Entertainments and Water Sports”

In 1932 there was a “King Carnival” who opened the Carnival Week at the Town Square, which was illuminated by coloured lights. There followed a welcome of King Carnival and his suite by Mayor Mr T. Jackson.

By 1934 it was decided that a full time staff member would be required to run the event and Mr W. Lints of Wanganui was appointed, he subsequently resigned in 1935. This did not deter Council from organising the next one via the town’s information centre staff.

In the Auckland Star, 3 January 1942, p.3 it was reported that “The weather joined forces with wartime restrictions to dampen the carnival spirit” and “for years the number of visitors to the New Year Carnival had been estimated at 15,000. Many old residents were of the opinion that there were fewer visitors than on any occasion since the first carnival was held about 18 years ago”

With thanks to the Don Stafford Collection and Papers Past for the information above.

Posted by Te Aka Mauri Rotorua Library at 10:33 am No comments: