Recalling memories of summer holidays in New Zealand aren't complete unless you factor in camping outdoors. As I recall, camping ranged from the basics (packed on a trailer) to the fully stocked caravan or VW Kombi. My family memories of summer camping were at the basic end of the scale. I recall our huge canvas tent that required the whole family to put it up, our food cooled in the river, dinner that was caught right before it was cooked and not an electrical appliance in sight. Entertainment was what we created and roaming miles from a campsite was the norm (as long as you were back by dinner). Meeting and making news friends every holiday was expected and education about the outdoors often vital (getting bit by a katipō spider).

Over the past decades, have summer holidays in New Zealand changed so much? This photo from 1932 shows three popular ways of spending summer holidays. Look familiar?


This post focuses on how summer holidays were spent in the Thermal Region of The Bay of Plenty.

As far back as 1895, visitors to the area like Lady Glasgow and her daughters enjoyed their time spent in the Thermal Region and it was described in the newspaper of the day:

"Lady Glasgow and her daughters Augusta, Dorothy and Alice, accompanied by Captains Clayton and Preston whilst here the last few days had a pleasurable cruising trip around Lake Rotorua and Rotoiti, camping out." Hot Lakes Chronicle, Wednesday 27 February, 1895.

In 1926 the Governor-General visited Rotorua and a group of children were captured by an Auckland Weekly News Photographer enjoying a summer dip.


In 1930 visitors to the thermal district enjoyed a range of activities by boat and car. Love the huge smile of the boy at the photo's centre.


Some visitors would venture a little further to places like Lake Waikaremoana. This photo captures the natural beauty enjoyed on a journey taken in 1931.


Which is a huge contrast to travelling through similar terrain a decade earlier after the rain. This motorist in 1918 faces the challenge admirably, especially smartly dressed.


During the summer tourist season in Rotorua, even the local guides need a break. This photo from 1933 shows a group of guides' playing cards, a popular summer holiday pastime.


This group of young ladies showed their sense of style while spending their summer holiday at Lake Rotoiti in 1934. I love what looks like a tin billy held by the young lady second from the left.


Five years on and the way people spent their summer holidays hadn't changed much. Activities on and around the lakes were still very popular as seen in this photo from 1939.


Fast forward three decades and apart from the changes in fashion and cars, holidaymakers at Hamurana in 1970 still spend their summertime close to the waterways of the Thermal District.

This post was written by Ani. With thanks to Auckland Libraries, Sir George Grey Special Collections, and Archives New Zealand.

Summer is coming to end. There are many pleasures of the great Kiwi summer - barbecues and camping are two just two.

In December 1952 the Rotorua public were treated to an authentic American style barbecue held at the Rotorua Borough Motor Camp (also known as the Municipal Motor Camp).

It is believed that this was the first time a barbecue had been attempted in Rotorua on a large public scale. Mr. A. Mackey, an American who run the camping ground store supervised the cooking.

Those who attended also participated in line dancing.

The Rotorua Motor Camp is Rotorua's longest running camp ground. Today it is known as the Rotorua Thermal Holiday Park. The camping ground was originally located on the corner of Devon and Ranolf Streets.

The council run camping ground opened around 1929. According to Peggy Allen's book Rotorua people 1880s to 1940s: living south of the old railway: Glenholme area to Whakarewarewa, the land was originally known as Steele's 40 acres.

In around 1953 the camping ground moved to 469 Old Taupo Road, opposite the Arikikapakapa-Rotorua Golf Course, where it is still operating today under private ownership.

If you have any memories / photos of camping in Rotorua or enjoying a barbecue please add them to Kete, an online community space.

This post was written by Graeme. With thanks to information from The Rotorua Post, Sir George Grey Special Collections, Kete Rotorua, and Rotorua people 1880s to 1940s: living south of the old railway: Glenholme area to Whakarewarewa (Peggy Allen, 1996).

The first ceremonies to be held at Waitangi in 94 years were held over two days 5th & 6th February 1934.

“The weather did not cooperate in the three days leading up to the celebration, it rained and was accompanied by an easterly gale, that made conditions very uncomfortable”. Marquees had to be taken down at the encampment where members of the various tribes assembled prior to the morning of the first ceremony. First to arrive were some 238 Ngati Porou, to pay their first official visit to the peoples of the north.

“…a chosen team of 70 Wahine joined the warriors and performed a haka…. Then it was the turn of the local maidens to give a haka, during which Mr Apirana Ngata joined in for a short time”

“… after the haka and waiata, Mr Tau Henare welcomed the visitors, the other speakers included Te Riri Mihi Kawiti a descendant of Hone Heke’s fighting general”

“… the new bridge over the Waitangi River, giving access to the estate by road is now unofficially opened and the regulation of motor traffic throughout the celebrations will be monitored by the ‘Automobile Association’

The Governor-General Lord Bledisloe with his wife and their party sailed on the Government steamer ‘Matai’ visiting two lighthouses and will arrive at Kawau to watch the Royal Yacht Squadron’s regatta, and will arrive at Russell on ‘Saturday’ night.

On Monday 5th February 1934 “performers from all tribes present will take part in welcoming the Vice-Regal and Parliamentary party to Ti Point, some 5000 took part”.

It is reported that there were 8000 people assembled on the Marae. “Action songs, past and present, were contrasted in offerings from the Gisborne and Rotorua parties.” Te Arawa sent some 300 people to take part.

Part of Lord Bledisloe’s Speech  “…That the Maori race should have signalled their modest gift to the people of New Zealand of the adjoining estate – the cradle of the nation – by these anniversary celebrations was characteristic of their unswerving loyalty to the British crown, and was a gratifying testimony on their part to the sincerity of British honour and integrity… “

Part of the duties of Lord Bledisloe was to gift to the people the ‘Treaty House’ and land.  On the following day the ceremonies were transferred across the new bridge to the Treaty House.

With thanks to the Daily Post (Rotorua Post) for the above information.  Please ask at the Heritage and Research help desk for access to the full articles. Printed in the Rotorua Post 3rd Feb 1934 pg5 and 6th Feb 1934 Pg.’s. 4 and 6.

Posted by Te Aka Mauri Rotorua Library at 10:00 am No comments: 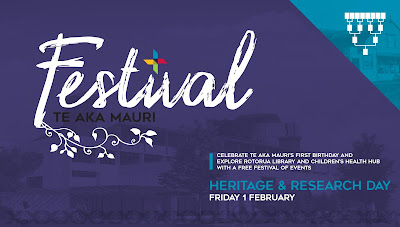 Below is a brief history of the building know as Te Aka Mauri, Rotorua Library. We hope you come and make your own memories in this special place.

The former government building between Haupapa and Arawa Streets was renovated and opened to the public on 16 December 1991 as Rotorua Public Library. 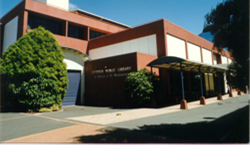 In 2008/9 the library building was extensively renovated, adding 1000sq metres of floor space for the library.  A cafe was incorporated into the entrance design and an extra floor was opened up to accommodate the growing collections.  Three meeting rooms were created as well as a secure browsing area for some of the library's special heritage collections.  The entrance door was also moved to face out to Haupapa Street.  At that time, the library's name changed from Rotorua Public Library to Rotorua District Library. 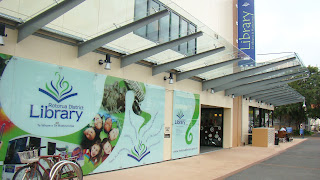 In 2016 the library building was extensively renovated again in collaboration with the Lakes District Health Board which is what you see today.The aim is to provide a one-stop hub for children and their families with a range of services and amenities that contribute to well-being and learning. 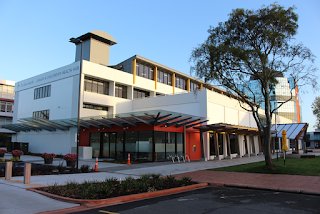 This was where the front entrance to the library was. On either side were stained glass artworks by local artist, John Skudder. The windows are now located on the 2nd floor outside the Don Stafford Room. 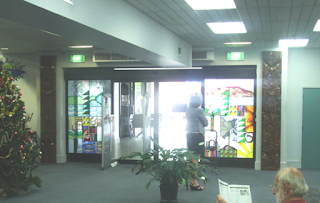 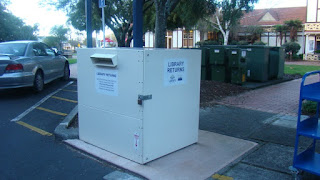 There was an overhead walk-bridge here that linked the two buildings. This building (Te Aka Mauri) was where several Government departments were housed. The other building (Māori Land Court) was where the Māori Affairs Department was. The bridge was removed at the end of 1990, when construction on the library building began. 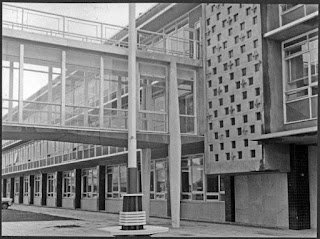 The library’s mobile bus was housed here from 1991 to 2009. The space was also used by library staff to create and decorate floats for the Santa parades.  The space was then re-used as a café (Library Store Café) from April 2009 to April 2016 and had a beautiful mural by artist Mark Spijkerbosch. 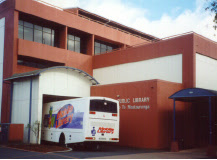 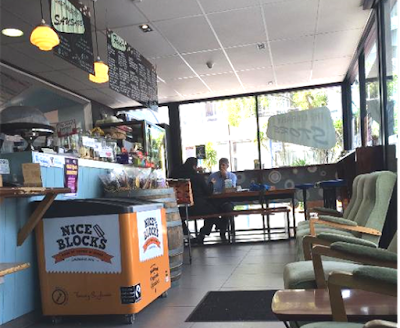 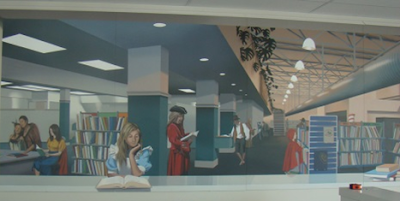 This space was used as the children’s area where activities were held and stories told from the carved wooden throne installed in 2010 and carved by Jamie Tereimana Tahiata. A fantasy mural by Marc Spijkerbosch used to cover this wall where the screens are. Local graffiti artist ‘Antz’ created a mural on the wall behind the fiction close to the men’s toilets of a taniwha. 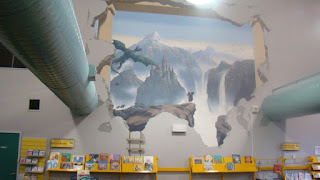 This area was where the teens area was. Local graffiti artist Ant Haines created the ‘gurl’ and ‘boi’ murals on the walls by the windows. 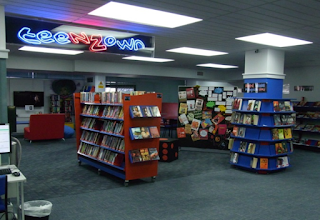 The adult non-fiction was arranged in Living Rooms, categories of books in similar fields, close to each other

The archives, hidden from public view, were in the front corner of the now Discovery Space 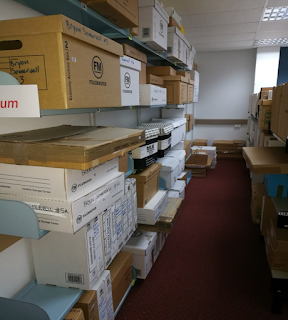 What was the staff room is where the Heritage & Research Desk and computers now reside.We welcomed and said farewell to many staff and recognised each other’s achievements.

On this floor prior to the 2008, the 2nd floor was also used by Waiariki Polytechnic as teaching classrooms. 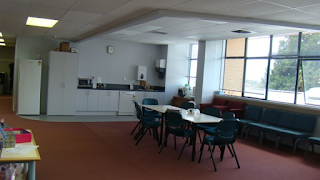 This was part of our staff work space where our new library books were processed. It was also where we ran the library business from day-to-day. 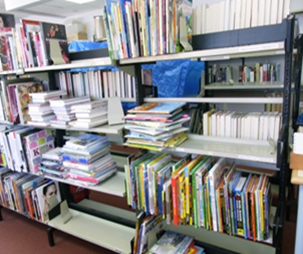 The corridor beside the Reading Room 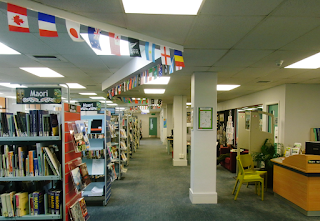 This blog compiled by Trish. Many thanks to staff and ex-staff for photos and memories
Posted by Te Aka Mauri Rotorua Library at 6:00 am No comments: