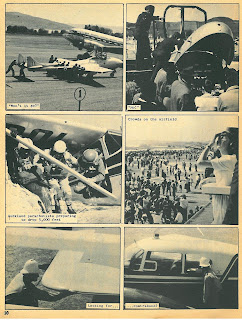 Festivities on the day included over 100 aircraft from a 'Friendship' to a 'Tiger Moth' converging on the airfield, sightseeing trips took 100s of trippers round the lakes, Aerobatics, gliding, topdressing, supply dropping and parachute skydiving. The Prime Minister's arrival coincided with an artillery demonstration by the Australians, their blank shots making a fitting salute.  The day was organised and run by the Rotorua Aero Club and local Jaycees. (Source : Rotorua Photo News October 24th, 1964)

The above sources can be viewed at the Library on the 2nd Floor and you can read the Daily Post coverage and see the photos online.

"I still remember my very first Aeroplane flight at age 5 or 6, it was an NAC plane from Gisborne to Napier" Blog Author, Alison Leigh.

Posted by Te Aka Mauri Rotorua Library at 4:44 pm