On this day in the Hot Lakes Chronicle

In July of 1895, Rotorua was experiencing very chilly temperatures.

Temperatures of 14° Fahrenheit or minus 10° Celsius were reported on in the Hot Lakes Chronicle. At least locals may have been able to warm up at the Priest's Bath and the Sulphur Bath which ranged from 35-41° Celsius. 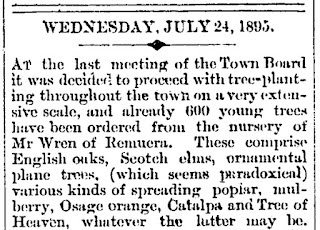 While we now have an abundance of beautiful trees in Rotorua, in 1895 residents had been deterred from planting trees by the "evils" of stray cattle.

The Town Board took matters into their own hands and decided to plant 600 trees throughout the town. As well as leading by example, they moved to strictly enforce the Impounding Act and abolish de-pasturing licences which allowed farmers to graze the land. 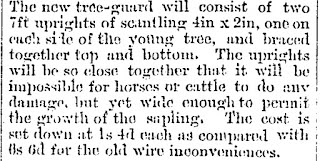 Instead of keeping stock away from young trees with barbed wire, they decided to try a new form of tree guard suggested by Mr Roger Dansey. 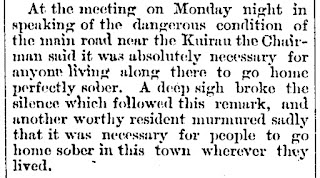 Something that hasn't changed since 1895 is the recommendation to only take to the roads when sober.


To get the latest literature in 1895, you could view print catalogues at the Hot Lakes Chronicle office. Of course it's now far easier and you can view the Rotorua Library catalogue online!

The 24 July 1895 edition of the Hot Lakes Chronicle also reports on issues such as postal delays, the recommendation for a Public Hall, the initiation of a Māori band, town land agreements and the wit of Guide Sophia.

The Hot Lakes Chronicle was digitised in a joint project between Rotorua Library and the National Library. So much can be learned of our past on this fabulous resource which is available online at Papers Past.
Posted by Te Aka Mauri Rotorua Library at 6:36 pm