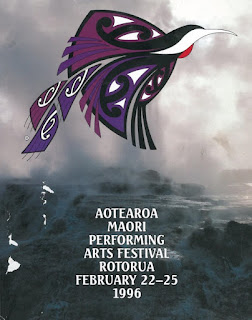 The stylised image of the Huia symbolizing Excellence & Beauty.

Comperes for the festival were: Temuera Morrison, Piripi Munro and Maureen Waaka.

The Governor-General of NZ – Dame Cath Tizard was welcomed by Ngati Whakaue as part of the opening ceremony.

Day 2: 9.00 am to 7.30 pm. followed by a social function at the Sportsdrome with band ‘Azziz’
Day 3: The finalists commence competition for the Aggregate Title.

Above information is from the official programme for the festival.

1994 – At Hawera. Ngati Rangiwewehi was rated in the Top 4 again. A place of familiarity for the group, who have been in the top for 9, out of the last 11 festivals.  See all the photographs and highlights in Mana magazine, Feb/Mar 1994 p. 20. Overall Winners 1994 : Te Waka Huia.

Posted by Te Aka Mauri Rotorua Library at 2:02 pm