The news for Tuesday 22nd July 1969 was dominated by the Moon Landing, but also in the news that day was the new Rotorua police station, which opened on Fenton Street for business at 8am. At that time the telephones and radios were changed over, and the doors of the old Tutanekai Street station (now the Pig n Whistle) were closed by Inspector E. C. Welsh.


The watch-house was located on the ground floor directly opposite the main entrance. The two-storey, 22-cell block building had facilities for both male and female prisoners, with proper meal, recreation and toilet facilities, and thermal heating.

The top floor had a photography darkroom, a large recreation room, and the records and administration offices.

The opening was preceded by a parade led by the Auckland Highland Pipe Band under Drum Major P. Faulkner. The parade featured members of the uniform branch, the Criminal Investigation Branch, the women's division, and the dog unit.

After the official ceremony, members of the public were invited to view the station and tea and light refreshments were served in the canteen.

Click on the images below to see them full size. 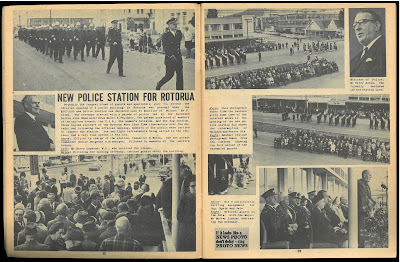 
There have been minor changes to the station building over the years. For example, in 1989 the station was painted lilac with eden green and chetwode blue highlights. A colour scheme, which divided opinion at the time.

The first part of a major redevelopment occurred in 2008 when the cell block was replaced with a $14 million custody centre.

In 2012 the Fenton Street Police Station underwent a much needed $18.5 million upgrade.

During the demolition and construction of the new building the temporary police station was located across the road in the former Spence's building. Some staff, such as the patrol group, road patrol group, dog handlers and tactical group worked from the existing Fenton Street site out of temporary buildings located behind the custody centre.

The newly renovated station was blessed at 5.15am on Monday 19th May 2014 by several iwi representatives. It had its official opening on 6th June 2014.

This post was written by Graeme. Thanks to The Daily Post and Policing two peoples: a history of police in the Bay of Plenty (Jinty Rorke, 1993).