The Rotorua Electricity Charitable Trust purchased two more sculptures for the city by local artists, these being 'Forever Remembered' by Paul Bottomley and 'Tank Trap' by Jamie Pickernell to add to the new sculpture trail. Daily Post 28 January 2015.


In 2016 the next symposium was entitled 'Sulphur Lakes Sculpture Symposium' and took place 19th to 27th November 2016. 14 artists worked in an open space and locals were encouraged to go down and watch and see the artworks take shape.

The theme this time was 'The Energy Within' capturing Rotorua's geothermal and cultural environment. As with the first symposium, the winner's creation became a permanent part of the Rotorua public art collection.

Another 3 pieces were purchased to enhance the new boulevard in Kuirau Park, they are : Takutaimoana Harawira - Kuirau : Nigel Scanlon - Ore Ore : Peter Edwards - Te Korokoro o te Parata (Throat of the Parata). All remaining work was installed on the Sculpture Trail until the next symposium in 2018.

Winner of the 2016 Symposium was local artist Trevor Nathan with his piece 'Synergy' it "reflects the interaction between rural and urban environment and how we come together as a city to create the energy in our town"
Daily Post 23 November 2016 and 3 March 2017.

The theme was 'Nga Wai o Rotorua - The Waters of Rotorua and was run from 16th November to 26th November.

This year's winner is Rory McDougall of Hokitika with his piece 'Waters of Rotorua' made from Taranaki Andesite Stone it represents the thirteen main bodies of water alongside the rivers and hills of the Rotorua area.

A further three pieces are being considered for purchase for the public art trail.

This year there is a People's Choice option for the first time, so get on down to the gardens and vote for your favourite, you have until 17th February 2019 to get your vote on the Creative Rotorua Facebook page
Daily Post 26th November 2018.

Photographs of a few of 2018 entries, Get your vote in now 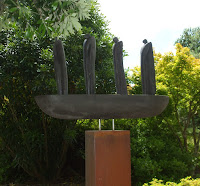 This post is by Alison. All photographs of the latest entries taken by Alison.

Posted by Te Aka Mauri Rotorua Library at 4:19 pm